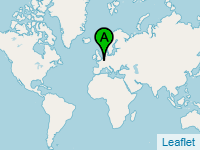 Dutch grid coordinates are used for the European part of The Netherlands. The x-value runs from West to East and the y-value from South to North. Since it is a cartesian coordinate system it's very usefull for mathematical calculations. The central point of the system is located at the top of the Onze Lieve Vrouwetoren in Amersfoort, hence the other name Amersfoort coordinates. 155000 463000 are the coordinates for this location. Due to this choice x and y values are always positive for the European part of The Netherlands and y is always larger than x.